As someone who often becomes physically and emotionally overwhelmed by day-to-day life, taking some much needed time for myself is always welcome. I spent the day alone today, so not only did I get to relax, but I also finished Death Note, an anime I have been watching, and I finished a drawing as well. Quick note to any anime fans (not a death one, though), if you're interested in Death Note, I would advise not Googling anything and simply going and watching it. It's a really good anime, despite me having some qualms with it in places, and I highly recommend it.

Before we head on to the main topic of this post, I will discuss a couple of other things I did today that weren't so relaxing.

Trigger warnings for sexual themes, with f-bombs to match, and mentions of abuse/rape.

Firstly, I wasted two hours watching Fifty Shades of Grey. Anyone who knows me will know that I have not read any more than a few pages of the books, and don't particularly hold them in very high regard, so what possessed me I will never know. SPOILER ALERT; I spent two hours watching a film about a millionaire introducing a startlingly innocent 21-year-old, who seems to have gone through life without being encountered by the existence of butt plugs, to his sex dungeon. Plausible, you say? Okay, fair enough. Not everyone gets more than their daily dose of the Internet so I can get behind it (haha). There are some pretty special gems in there though that I've extracted just for you;

-  Christian spends a decent amount of time trying to convince Anastasia that his playroom is worth compromising for, that she should sign a contract and become his sex slave. He insists that she considers it.
Anastasia: "Will we still go out to dinner, and movies...?"
Christian: "That's not really my thing."
What the hell, Christian?

- Christian: "If you were mine you wouldn't be able to sit down for a week"
This alone might be enough to make you cringe, but I expected this kind of thing. What I didn't expect was that he would randomly rip his shirt off, crawl across the bed and TAKE A BITE OF HER FRICKING TOAST. I don't know about anyone else, but that'd be me screaming the safe word.

- Christian: "my playroom"
Anastasia: "like your Xbox and stuff?"
*sick*

If you want more hilarious and also shocking examples of this painful series please do read a wonderfully cutting post here; Grey: 32 creepy extracts that prove Christian Grey is the worst.

Not that anything can really top my disastrous film-watching experience but I randomly decided to make these Watermelon & strawberry slushies today. Tasted nice but, in short, I am never deseeding a watermelon ever again.

Finally, we are onto the subject of vampires. Whilst watching the dreaded Fifty Shades of Grey, I was thinking about how it started off as a Twilight fan-fiction. As the two ventured into a misty forest, oh-so-Twilight-esque, I was wondering why Stephenie Meyer made it so that vampires sparkled in the sunlight. I believe it's explained through the fact that their skin is marbly, hard and smooth, and I started to think more about how I would write about vampires. My first question was why are vampires always predominantly humanoid? despite their transformations into bats and such. I was wondering if our often romantisised and sexualised portrayal of them was to blame; wouldn't want to make it too weird right? Just a slight sense of necrophilia should do it. After doing some skin-deep research, it was immediately obvious that vampires were originally undead individuals, of course, so naturally they're sort of human-ish. I did find that little extra information I was after when noting legends of chupacabras, who were said to primarily feast on goats. I enjoyed this fact simply because of my representation of a vampire; 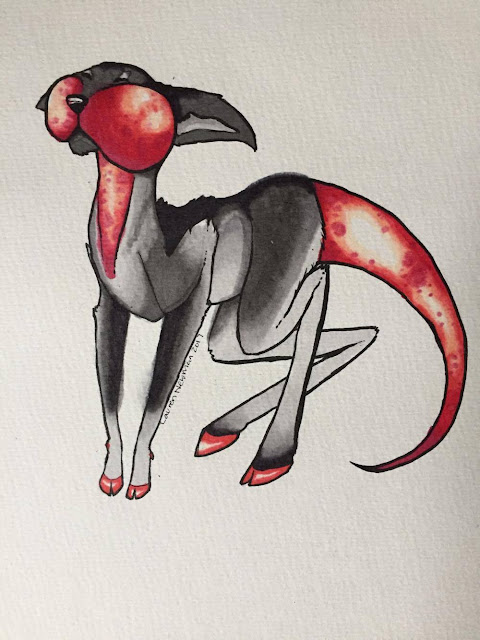 So I've managed to create a somewhat cute version of a chupacabra that unintentionally resembles the very thing it's meant to suck the blood from, though the head is significantly more canine. My idea was that, behind the cheek-pouches, there are long, black teeth which extract the blood and deposit it in the cheeks. The blood then transfers into the body through the throat and is stored in the tail. The image was created using my Pigma Micron liner set and, my absolute favourite medium, my Winsor & Newton bullet tip/chisel tip markers. It feels so nice to feel my way into art again. Next time I hope to share last year's Inktober!